Friend and fellow author Sue Bolich has a new book out - a different kind of historical fantasy, a vivid and deep and funny and pooignant piece of historical Americana. I heard her read from this at a recent con and it was an amazing piece of work. Here's what she has to say about her novel, which is available RIGHT NOW:

“‘Til death do us part.” The forever vow. The one that binds us in our hearts, our souls, and cloaks us in the permanence we all crave. It’s a promise that from this moment forward we will never be alone. We will always have someone to stand beside us, to love, honor, and cherish.
But then death does come along. Is the vow really broken? How can love end—especially if the ghost of your loved one foreswears Heaven to be with you?

And what if you don’t want it to end? Why should you go along with all the people telling you to get over it and move on with your life? What if your dead husband is...right...there? So what if you can’t touch him??? Does that make you the coolest kid on the block—or a candidate for the asylum?

Thus we come to “In Heaven’s Shadow.”

When I started to write this book I was dealing with the lingering grief of my father’s death. I had no idea what it would be about; I’m one of those seat-of-the-pants writers who gets a first line and then runs with it. I had a powerful image of a young woman watching a small and sorrowful delegation coming up her front walk, but she already knows they’ve come to tell her that her soldier husband is dead. He’s walking along right behind them, hangdog and sorry as can be that he’s coming back to her a ghost.

Instantly her mind leaps past grief to making the best of it. And I knew right then that Lilith Stark was no ordinary Southern farmwife dealing with the loss of her man at Gettysburg.

I also knew that this wasn’t going to be a retelling of “Ghost” where the dead lover has to accomplish some task and move happily on to Heaven. Really, why should he have to? Can’t he be perfectly happy right here? And why shouldn’t his loving wife make whatever life she can with him?

Better yet, why should the neighbors care, as long as she’s happy? But, of course, they’re scandalized by Lilith’s failure to be properly grief-stricken. What would you do if your best friend announced her dead husband was home? Or if you saw rainbows grow out of her laughter and leave bright puddles on the floor? Are people right to demand that the dead just move along? Do we really need the family homestead filling up with generations of ghosts fighting for space in the heirloom bed?

Man, this story was fun to write.

“In Heaven’s Shadow” grew out of a long-running debate with a friend over what’s “normal” and what’s nuts and who gets to decide. It’s set during the Civil War because a) I’m a history major and b) well...I’m a history major. I need to put that degree to work somehow. But when it comes down to it, history, like fantasy, lets us explore ourselves through fascinating prisms. Virginia, 1863, was a place with strict social mores layered on top of a society that was still half pioneer at heart. Culturally, it was a wild blend of forced propriety and unbridled individuality, complicated by having all its conventions overturned by armies marching through the fields. It was both the great age of faith and a time when people really needed something to cling to. Our ancestors were more communal than we are, more dependent on their neighbors, and highly sensitive to changes and discord in the community. With war raging outside the town, the last thing Lilith’s neighbors need is more upset within, but that is exactly what they get when she accidently lets slip that Joab has come home—dead. And Joab’s not alone.

Death is complicated. Love is complicated. Being ourselves is complicated, and takes strength most of us don’t know we have until something forces it out of us—or we crumble under the challenge, beset by conflicting opinions of right and wrong and “should” and “shouldn’t” and peer pressure. Watching Lilith trying to fight her way through the minefield of public opinion while clinging to her beloved Joab, and her magic, and her peculiar outlook on life, is alternately funny, maddening, and  bittersweet—but hopefully always entertaining. And if it sparks a new thought or two...cool. I’ve done my job!

You can order “In Heaven’s Shadow” in e-book form direct from the publisher at http://www.taliesinpublishing.com/in-heaven-s-shadow-p33.php or at the following outlets:
Amazon: http://www.amazon.com/In-Heavens-Shadow-S-Bolich-ebook/dp/B00I9Q2UJQ/ref=sr_1_1 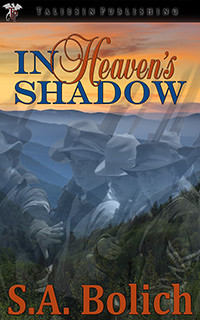