Oh, what I MEAN is that there's a brand new press (the aforementioned "Zombies Need Brains") which is doing an anthology about steampunk and aliens (and other things in times to come, it would seem) and it's all because of my friend Joshua Palmatier who wanted to tell you about it himself - so here he is:


Alma asked me here today to answer one simple question: Why did I create the small press Zombies Need Brains LLC?

The answer to this is easy: BECAUSE IT WOULD BE FUN! I got into editing anthologies with Patricia Bray a few years ago and we had a blast wrangling authors and deadlines getting the two anthologies—AFTER HOURS: TALES FROM THE UR-BAR and THE MODERN FAE’S GUIDE TO SURVIVING HUMANITY—into tip-top shape. Doing the first anthology was just a whim. “Seven authors walk into a bar . . .” ended up not being the start of a joke after all. With those authors’ help, we crafted the AFTER HOURS “magical bar traveling through time anthology,” and in a fit of “Why not?” I proposed it to Tekno Books, who pitched it to DAW, and the rest was history. MODERN FAE quickly followed.

Unfortunately, Martin Greenberg, head of Tekno, passed away. It looked as if there wouldn’t be any more anthologies, at least in the near future. Patricia and I sat on that for a while, hoping things would work themselves out. But I finally got antsy. We wanted new anthologies now! So I decided the best way to do that was by forming a new small press. Zombies Need Brains was the perfect name for it, because brains are tastier when they’re well-read, and zombies do only want the tastiest brains.

So I formed the small press, legally and mentally, and now we’re ready for the first book. Starting a press isn’t cheap though, so we decided the best way to make certain the project succeeded was to use Kickstarter as a crowdfunding resource. This has two advantages—it raises money BUT it also gave us a way to judge whether the readers were excited about a project or not, since if they weren’t interested, they just wouldn’t fund the project! But I think our first anthology concept is awesome. It’s called CLOCKWORK UNIVERSE: STEAMPUNK vs. ALIENS. When aliens reach Earth, they encounter the clockwork mechanisms and Victorian sensibilities of a full-blown steampunk civilization. Inspired by the classic science fiction adventure tales of the nineteenth century, leading fantasy and science fiction authors will bring us tales of first contact with a twist, as steam power meets laser cannons . . . and dirigibles face off against flying saucers!

Cool, huh? Swing on by the Kickstarter to check it out in more detail and then help fund it! And please spread the word about the small press and the Kickstarter to your friends by blogging, posting, tweeting, etc. We’d appreciate it.

There is, of course, a more serious reason for creating the small press. Both Patricia and I feel that the short story market has been steadily shrinking for a while now. One of our reasons for getting into the anthology business earlier was to help keep it alive. It was struck a horrible blow with the death of Martin Greenberg. We want to keep the short story market going, and the best way to do that is to start producing stellar anthologies with awesome authors and jaw-dropping cover art. Zombies Need Brains will do that.

But really, it’s just too much fun NOT to do it! So check it out. And if you can, back us. You’re not just backing a cool anthology concept with some great authors already signed on (Scott Lynch, Seanan McGuire, Gini Kich, Ian Tregillis, Bradley Beaulieu, Caitlin Kittredge, Gail Z. Martin), BUT you’ll also be helping to create a new force in the publishing industry with Zombies Need Brains! 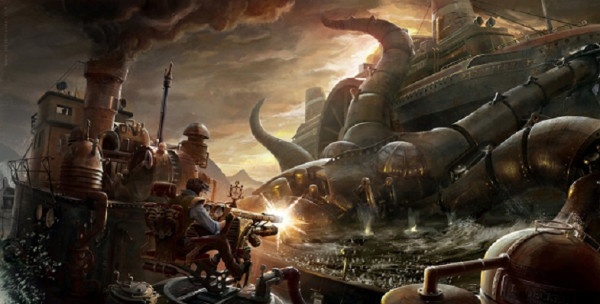